The role of the Director - speaking with Jonathan Finnigan

How Stellar is making an impact in the nonprofit sector - speaking with Daniel Fisher Apr 22, 2021
Food insecurity in 2020 - Speaking with Chris Costanzo, founder of Food Bank News Oct 06, 2020
Leadership, culture and effectively engaging your teams - speaking with Nada Lena Nov 18, 2020
A new model for connecting consumers and producers - speaking with Scott Fry May 24, 2021
Learn how the right mindset is essential during times of adversity - Speaking with Karen Tok Dec 14, 2020
Categories | Subscribe | Populars
Written by Matthew Rickard
on May 11, 2021

Jonathan Finnigan is a British award-winning film director and director of photography based in France and Hong Kong. Brought up in Yorkshire and educated in the UK, his professional life followed art college in London.

Since moving to Asia 27 years ago the world opened up. Hanging out of helicopters in Sumatra,  filming with nomads in Tibet, rescuing elephants from Pakistan and wandering through the Taklimakan desert in search of Marco Polo’s legacy are just some of the adventures that have presented themselves in the course of the ordinary day job. 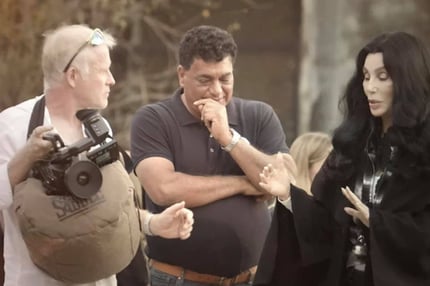 So, it’s no surprise that filming in wild places and in difficult situations are considered Jonathan's specialty for the likes of National Geographic.

As we all know, technology has revolutionised the film industry and Jonathan realised he needed to evolve to stay competitive.  So becoming a skilled editor and cinematographer was a natural evolution and has, as importantly, increased his enjoyment of the craft of filmmaking.

On this podcast we chat about Jonathan's work as a film director, what's involved in the process, and how the industry has changed over the years.

We discuss the high lights of his career to date with a particular focus on his most recent project Cher and the Loneliest Elephant, a 2021 documentary that follows the five year struggle to save an elephant named Kaavan from abuse—and seeks to inspire similar efforts around the world.

Jonathan  directed and co-wrote the documentary and was part of the team that traveled with Kaavan from Pakistan to a serene sanctuary in Cambodia — all in the midst of a pandemic. As a filmmaker Jonathan captures the elephants trauma while drawing your attention to the challenges and journey that lead to the elephant’s bright future.

Or you can visit his profile on IMDB or LinkedIn.

If you enjoyed this podcast why not listen to others? Subscribe now...

Melanie Blackmore has been involved with the creation, development and implementation of British and International stand...

Scott Fry is the founder of Loving Earth, an ethically driven company that believes Food is Sacred. On this podcast I ch...

Supporting the Goals with Colin Curtis

On this episode we speak with Colin Curtis the Managing Director of Support the Goals, an initiative to rate and recogni...

Get Task podcasts to your inbox.

Stay up to date with the latest podcasts from Task.